sj_zero sj_zero
It can for a while, but not forever. We've got a real crisis brewing, because the few productive people that are left are dying of old age. Those immigrants are going to turn right back around more and more as they realize they're not going to get ahead coming here.

sj_zero sj_zero
It's really weird, video games are like that yogi berra quote: "Nobody goes there anymore, it's too busy"

Everyone I know is less interested in video games than ever before and more disappointed with what's released, yet somehow they're making unimaginable amounts of money every year.

sj_zero sj_zero
der Fuhrer Trudeau says: "Everyone deserves the right to protest, except the people who disagree with me!"

sj_zero sj_zero
It doesn't really end up sustainable though. Within a generation the kids of that immigrant are living the same as everyone else.

The Amish is a different beast, because they're completely outside of the system we've built. Certainly seems to be evidence that there is another way.

I expect big changes in the next couple generations. The whole world looks different when populations start to shrink, starting with a massive improvement in quality of life for the working class. That's why governments and corporations are so terrified of a shrinking population.

One interesting thing you hear from immigrants is that they're shocked at how expensive just living is. Many move back after realizing it isn't actually the land of milk and honey they've been promised.

sj_zero sj_zero
It's a combination of many factors. Tiny income growth often not keeping up with inflation is one, high cost of living in terms of finding a stable place to live is another, both the drive to get women into the workforce and the requirement that they get into the workforce to be able to maintain a reasonable quality of living is yet another.

My wife really felt a peer pressure not to be a stay at home wife and mother. That's what our culture is doing to women. She rejected society's demands because that's what she wanted, and I feel our family is happier for it. The thing is, not only did she have to reject society's pressure to go fail to become a CEO, but we also have to walk an economic tightrope to be able to attain the ability to have such a lifestyle.

sj_zero sj_zero
The fact that the number of kids collapsing I think has a core economic basis. If people feel like they can, they inherently *want* to procreate -- that's a fundamental of life. The problem is that entire generations have felt like they can't for various reasons.

The Millennials were actually a relative population boom, that's why the generation is called "Echo boom" by some sociologists. But then those kids grew up into situations where they didn't feel they could have kids of their own, and so there's serious problems

The attached image demonstrates that the working class is getting a short end of the stick. Everyone is working harder and harder for less and less. In times where disparities like this add up, there's often bad times for everyone ahead. The French Revolution was one such time in history, for example. 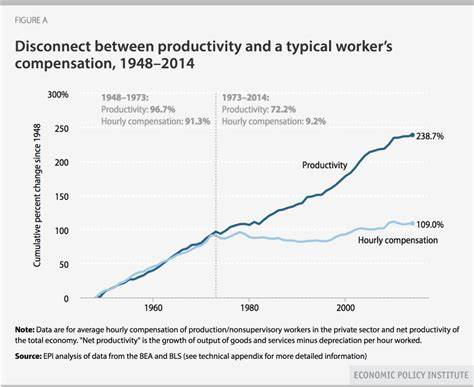 sj_zero sj_zero
The half application of Keynesianism is one of my biggest pet peeves in economics and politics.

We just finished having the longest economic recovery ever, and everyone everyone everyone went "we need to spend more money!" the whole time, despite under Keynes the right thing to do was to suck some of the air out of that recovery to save for tomorrow.

Reality is much more complicated. There's a reason why the workforce labour participation rate is at record lows, labour productivity is plummeting, fertility is below replacement, and so on and so forth.

In all 3 cases, you have people sucking up productivity but not producing any. That might make the numbers go up, but it doesn't improve quality of living for people as a whole.

Now, government spending *can* help improve productivity, but it has to be extremely carefully calculated because government cannot create wealth, it can only pull wealth from one spot and injected it into another spot. Medical doctors often pull something out of one part of the body and inject it into another part of the body and it results in positive results, but if you just do it randomly you'll kill the patient dead.

sj_zero sj_zero
The money printing may not have the same effects, but it's all monetary inflation.

Arguably, the effects of the main street bailout were better for the world because at least they were honest. The incredible malinvestment caused by 2008 has demolished many productive industries because not just money but talent has been siphoned off of other things to get lost in the black hole of tech. Hundreds of thousands of the generations smartest people working on chat apps and other useless crap. Trillions of dollars siphoned into useless crap instead of finding additional oil, gas and minerals. A total lack of investment in capital equipment such that key strategic manufacturing can't be done anymore without outsourcing it to our opponent in the next war.

At least the consumer side inflation is honest, it hits you in the face and you have to deal with it.

sj_zero sj_zero
So here's a great example of why I consider the Internet to be a great tool for humanity. We focus so much on the bad things that happen, but look at this! Adrian's Digital Basement is reviewing a super niche computer called the Nabu PC which was a tiny piece of history from the Ottawa area in the early 80s:

Well give it just a few days, and this guy DJ Sures has already got it executing code sent from a modern PC!